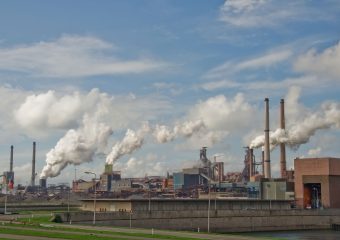 This post is part of the Environmental Law Review Syndicate. Read the original here and leave a comment.

The current investigation pursues a different strategy than past approaches to climate change litigation. Climate change litigation against greenhouse gas (“GHG”) emitters usually involves violations of federal law (such as the Clean Air Act or the National Environmental Policy Act).[iii] If a GHG emitter has not violated any federal or state environmental law, plaintiffs bringing an action against a GHG emitter face the difficult task of proving tort law nuisance claims.[iv] Avoiding this, New York’s investigation aims to hold GHG emitters accountable by attacking something more tangible: disclosures to investors.[v] The Martin Act, a New York statute, gives broad power to the attorney general to investigate companies for finance-related “deception, misrepresentation, concealment, suppression, [or] fraud.”[vi] Investigating large GHG emitters under the Martin Act allows New York to confront the problem of climate change without the difficulties of pursuing a climate change nuisance claim under tort law.

New York has been leading the movement for an increase in the disclosures companies must make about their internal climate change research. Before its current investigation, New York settled with Xcel Energy and Dynegy, Inc. in 2008 and AES Corp. in 2009, after investigating their omissions of climate change risks in SEC filings.[vii] As part of the settlement agreements, the energy companies agreed to disclose their potential financial exposure due to climate change, the incorporation of their internal climate change research and projections into their overall strategic plans, and the companies’ efforts to reduce, offset, or limit their GHG emissions.[viii]

These new SEC regulations give New York and other states an additional basis to investigate GHG emitters; however, it is unclear whether this government-led form of litigation will become a standard form of litigation for regulating the conduct of GHG emitters. The evolution of cigarette litigation provides insight. Individuals and families led the initial two waves of litigation but were unsuccessful due to skepticism about the emerging scientific research and vigorous opposition from cigarette companies.[xii] State governments, and not individuals, assumed the lead in the third wave of litigation and sued tobacco companies for the costs of treating people with tobacco-related illnesses.[xiii] This approach was successful, resulting in $246 billion in settlements and the disclosure of millions of documents about the health risks of cigarettes and the deceptive marketing of cigarettes.[xiv]

Like cigarette litigation, climate change litigation also faces political hurdles. Congress and the attorneys general of Alabama and Oklahoma opposed New York’s investigation into ExxonMobil.[xv] Lamar Smith, Chairman of the House Space, Science, and Technology Committee, subpoenaed both Schneiderman and Massachusetts Attorney General Maura Healey, seeking information regarding their investigations of ExxonMobil.[xvi] Both Smith and the attorneys general criticized the investigation as an infringement on the First Amendment protections that allow ExxonMobil and other companies to disagree about the science of climate change.[xvii]

Other states seeking to investigate GHG emitters using an approach similar to New York’s may face additional restrictions. The Martin Act gives the Attorney General of New York powers that are not available to many other attorneys general.[xviii] The Martin Act differs from other fraud statutes because the attorney general does not need to prove intent to demonstrate liability.[xix] It also allows multiple remedies. While injunctive relief was the original remedy, the Martin Act now allows the attorney general to bring criminal or civil charges.[xx] Of the seventeen attorneys general supporting New York’s investigation into ExxonMobil, only Massachusetts Attorney General Maura Healy has similarly issued a subpoena. [xxi]

New York’s investigation is still young, and there is little certainty about the outcome. If successful, the investigation could encourage other states to pursue similar investigations into ExxonMobil and other large GHG emitters. Climate change litigation may follow a similar path to cigarettes and other toxic torts, in which the increasing scientific evidence does not result in litigation success until the evidence becomes “overwhelming.”[xxiv] Until climate change science becomes overwhelmingly accepted, litigation involving residual considerations, such as fraudulent misrepresentations to investors, may be the most effective legal option for affecting companies’ contributions to climate change.

-Chris is a Junior Editor of the Michigan Journal of Environmental and Administrative Law at the University of Michigan Law School. He can be reached at cerick@umich.edu.

[xvii] This argument appears misguided as it does not address whether ExxonMobil committed actionable fraud or deception, as determined by the Martin Act, by not disclosing internal information about climate change.